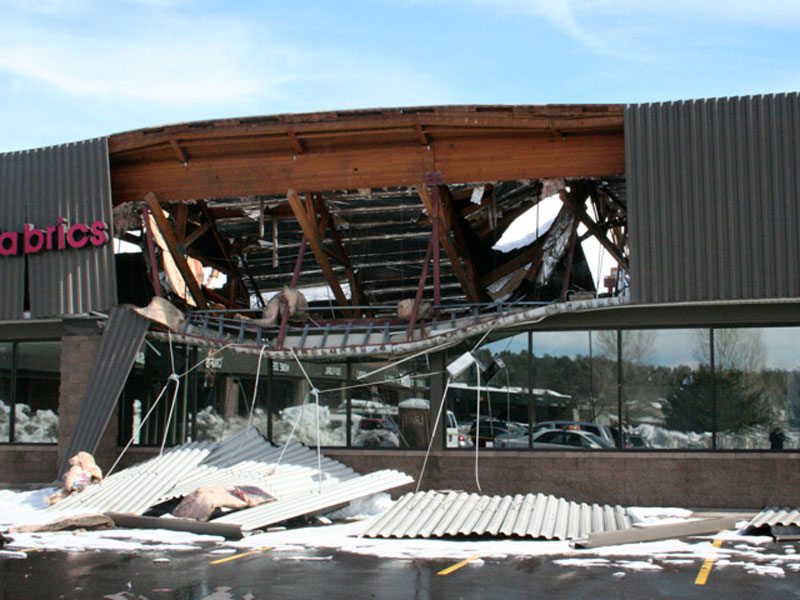 For many people in the U.S. winter is already here. Snow is currently falling across the Midwest and is also forecast for the Northeastern US in the coming days. Despite the forecast, proactive facility managers and building owners who already have their snow removal contingency plans in place are breathing a sigh of relief. These key decision makers recognize the critical importance of ensuring their commercial properties remain safe places to do work, shop, or store goods. They also know failing to remove snow from the roof can lead to disastrous results. Just how disastrous?

As the structural integrity of roofs on facilities, buildings and warehouses deteriorate, the chances of collapse due to snow load inevitably grow. When a building’s roof finally does succumb to the pressure of the snow and ice above, the effect on people and the local economy is immediate and widespread. According to the Insurance Information Institute, in just the year 2015, snow events, blizzards, and winter storms were responsible for an estimated $3.5 billion in insured losses (residential and commercial) with many of those claims linked to damage caused by collapsed roofs.

Roof Collapse on a Commercial Building is Preventable

“Buildings may be vulnerable to structural failure and possible collapse if basic preventative steps are not taken in advance of a snow event.”

FEMA also advises building owners and managers plan ahead and have their preferred snow removal contractor in place well in advance of a snow event.

“Having an in-house plan for snow removal in place or a contractor on retainer is imperative.  Contractors will be in high demand and difficult to find once a snow storm begins.”

Still Not Convinced Your Building Needs a Snow Removal Plan?

Here’s a news report showing what happened to a commercial building in Connecticut. Listen closely as you hear a business owner describe the reality of their situation:

Proactive owners and managers who sign up today receive:

*For faster service, please call us 48 hours before the snow event.

Signing up with one of the nation’s leading roofing contractors to expertly and safely remove snow from your commercial building is easy. To enroll, call North American Roofing today:

Three Drainage Solutions for Flat Roofs
|
From Our Family to Yours, Happy Thanksgiving